Mel like many of the seven witches grew up in the Witch Village, hidden on the Western Continent. She doesn't hold many of the predispositions of the older witches and often acts like a normal child her age.

Mel is a very happy young girl, and she often times does not take the situation at hand seriously. She tends to use her own vocabulary of somewhat bizarre phrases to describe a given situation, action or event, although it is usually clear what the underlying meaning to what she says is.

Mel also has a strong liking for superheros, and she often references the actions of a particular superhero during a given situation. She also, through storyline dialogue and Intermission conversations with Alph mentions that she reads about the adventures of her favorite superheros in a number of comic books. Often times Mel would tell Alph how to act more like one of her idealized superheros.

As well as her liking of superheros Mel also has a slight brash streak to her. Evident in one particular Side Quest, Mel can become over-zealous and boss people around when she sees fit, despite being the youngest. During the Side Quest she began ordering Pollon, Alph, and Kai to fight a group of bandits, these three being the characters she most presses her superhero ideals onto. Pollon stated that Mel was in this instance 'Acting like the Master' (referencing Master Payan). Mel can occasionally become irritable when she disagrees with someone or something and will act accordingly.

Mel's relationship in regards to the other members of the group that accompany her throughout the game in mostly good. She seems to gravitate towards Alph, Kai and Pollon, who each have characteristics that make her idealize or find them amusing. Mel idealizes Kai since he is a Samurai and his overall demeanor and character seems to fit in decently with her hero ideology, Alph also seems to fit this mold in some respect and he also contributes time (in the form of Intermission Sessions) to spend with Mel as he does everyone. Pollon in particular has a keen desire to be considered a 'Hero' which makes him susceptible to Mel's questionable advice on becoming one.

Mel is the first of the witches to join the party permanantly and she joined after Lucia. Mel is the slowest character but she was packed very powerful magical property. Statically she is an upgraded version of Cecille's Priestess Class. She has high Magic and Resistance, but lower HP and Speed.

Mel starts with some healing spells and Aqua which prove to be reliable at times. She will later learn Heal and Hail to give the party more damaging support. By the times that Cecille become Twilight Witch, Mel will likely got both Ice Crush and Salvation, which deals massive water damage and almost completely heal any character. Since she is slow, have an emergency healer such as Lucia first before having her uses Salvation is a key. 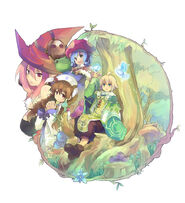 Add a photo to this gallery

Retrieved from "https://luminousarc.fandom.com/wiki/Mel?oldid=10309"
Community content is available under CC-BY-SA unless otherwise noted.