Lucia is a playable character from Luminous Arc, the first game in the Luminous Arc series.

Lucia first appears in Chapter 2 near the very beginning of the chapter. She first comes to the Ever Garden as a hired maid recommended by the Luminous Church. Lucia comes off as very stubborn and aggressive at first, and despite her place as a maid she makes demands of the others at the Ever Garden and refuses to do certain chores. Although the only chore she was fine doing with was sweeping, possibly because she liked the broom.

Later in the Chapter Lucia saves Alph during the night when he is ambushed by a horde of monsters by coming to his aide. In doing so, Alph discovers that Lucia is the Dawn Witch but she makes him promise not to tell anyone as she saved his life.

Lucia is the Dawn Witch, the witch of light element, one of the seven witches who were created by the world to protect it from the God Zehaal when he gathered enough energy to attempt to consume the world. As such she and the other witches were branded blasphemies by the Luminous Church, who praised false scriptures derived from the God Zehaal.

The events surrounding the early lives of Lucia and the other Witches are not completely clear although they are known to have lived in the Witch Village hidden deep within the magical forest of the Western Continent.

Sometime just before the beginning of the game Luminous Arc however, Lucia decided, with the consent of the other Witches to infiltrate the Luminous Church as well as find the "light". The exact way she did this is not exactly clear in the game, although she seems to have posed as an ambitious maid. Eventually, through this scheme she managed to become the maid of the Ever Garden as seen in the early chapters of the Luminous Arc game.

Lucia is a very strong willed and stubborn person. She is often very blunt and almost aggressive and rude when speaking to certain people (those she doesn't respect), such as Alph and Leon early in the game as well as Cardinal Kingston and Sir Andre. Lucia throughout the game often argues with Alph, although the arguments are often over things of very minimum importance. This aggression is considered to be Lucia's way of testing people or questioning them, though there are times she takes it too far.

Despite this, Lucia also has a very conscious and caring side. After Theo is hit with Vanessa's Rune spell that was aimed at Alph and that reverts a target that happens to be a Rym to their original dragonic form, Lucia felt guilty for it happening. In her guilt over the incident, Lucia decided to go find the Dragonic Geode to cure Theo after they had reached the Witch Village. The Geode can only be found at a volcano, however, that was crawling with monsters, which meant Lucia had to be rescued. So then Alph and his group set off to the volcano to save her after her disappearance.

Throughout the game Lucia also develops feelings for Alph. The two are both stubborn in nature although they do have deep convictions and feelings about certain things. In Lucia's special final Intermission conversation with Alph they go on a 'date' to a hot spring Leon had mentioned to Alph, although when they arrive there is only the single spring, meaning they both had to get in the same one. Lucia then plays a trick on Alph saying he could turn around, but when he did she got out of the hot spring and got changed using her powers. She then teases Alph mentioning that witches can change their clothes quickly using their power.

Alph also becomes Lucia's Rym during the game, through their 'fated kinship'. Lucia was the only Witch to have such a connection with a Rym during the game. After the final battle with the Wings Of Doom, Zehaal attempted to escape into a deep sleep once more, however Lucia tried to use a powerful magic which was so powerful it would take her life if she did it to destroy him once and for all. While all the other characters escaped, Alph stayed behind to protect Lucia from her own destructive spell and managed to save her life using his Rym powers.

As the Dawn Witch, Lucia uses the power of the sun as her main magic source with several attack and healing spells. She is a well-versed character handy in both healing and attacking situations, but her magic power is a little lacking which can be fixed with using magic boosting items. In terms of magical power, she is over shadowed by some of the other witches making her lean towards being a secondary healer or a primary if Cecille is used for mob control. Despite that, Lucia is the faster healer than Cecille and Mel, so she is good at emergency healing. 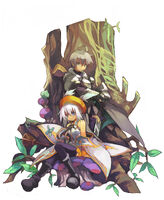 Lucia´s Hot spring
Add a photo to this gallery

Retrieved from "https://luminousarc.fandom.com/wiki/Lucia?oldid=10282"
Community content is available under CC-BY-SA unless otherwise noted.