Iris is a non-playable character in Luminous Arc, the first game of the Luminous Arc series. 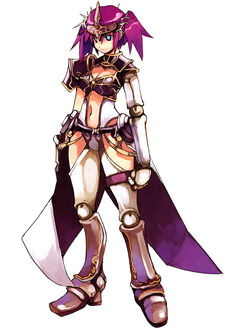 Iris was first discovered as a young girl by Sir Heath in a field of white flowers, unconsious. According to Sir Heath's account, Iris's parents died in an accident (which he doesn't further elaborate on) and she wandered aimlessly since. After walking for days, she collapsed from exhaustion. Sir Heath then found her and brought her to the nearby town of Madrasta.

Sometime after being found by Sir Heath, Iris found herself in the custody of the Luminous Church. Later on, she would be made into a test subject to be experimented on by the Round Table Council. These experiments would lead to her becoming the Steel Witch, the first manmade witch who was not created by Mother Lapistier.

According to Sir Heath's account, the Iris he found in the field of flowers was a lovely young lady. He also mentions that she loved the white flowers that grew in that field, and that she claimed she wished to be surrounded by them when she died.

After being turned into the Steel Witch by the Round Table Council's experimentation, Iris's personality became very robotic and direct. This can be easily attributed to the goals of the Round Table Council, who saw Iris as the mold from which they could build the perfect super soldier to fight the witches and the traitorous Garden Children. As the Steel Witch, Iris shows little emotion, the only exception being the few instances she encounters Sir Heath, as her memories of him are some of the few - if not the only - that linger.

Iris was originally introduced into the storyline in Chapter 14 when she accidently destroyed a Round Table Council research facility. Kingston introduces her as a secret weapon created by the Round Table Council. Throughout the middle of the game she serves as an antagonist, attacking Alph's group when ordered to and battling them on several occasions. According to dialogue Iris suffered several injuries during combat with them and had to have 'replacement parts' added as her body was damaged.

In the following Chapter 15 Heath first spots Iris as her and Kingston arrive in pursuit of the witches, although Kai arrives to save Alph's group before they can be killed or captured. Iris makes another appearance in Chapter 17, when she ambushes the lone Lucia at the Holy Statue at Parnus, but is repelled by a counter-attack by Alph. Iris's final appearance is at the Altar of Souls, where she again fights the group as Heath's arm advances. After the battle Iris is critically injured, while Heath arrives with his army and Priel arrives to sacrifice everyone there. Cecille saves Alph group from the sacrificing and Iris saves Sir Heath. Shortly thereafter Iris dies from her wounds and the only thing left was thunder lapistier, her heart.

Iris as the Steel Witch also boasts several powerful machine-like abilities. These include 'Hyper Mode' where her power drastically increases, and other such powerful abilities.

During Side Quest 4 (the only Side Quest in Luminous Arc not to feature a battle) Sir Heath visits the field of flowers where he first met Iris and thinks about her, promising not to allow anyone like Kingston to commit the kind of atrocities that were commited against her ever again. During the end of Heath's visiting the field he promises he will return once his quest is complete and an apparition of Iris appears before him before he leaves.

Retrieved from "https://luminousarc.fandom.com/wiki/Iris?oldid=9033"
Community content is available under CC-BY-SA unless otherwise noted.