Elle (エルル = Eruru) is a playable character in Luminous Arc 3 and one of the female protagonists of the game.

She is the wielder of the Water Lapistier, which is located on her back after the Transformation.

At the time of the game, Elle is a 4-Star Magi, a member of Urgard special course and also a member of Magus. We get to know that she lives and studies in Urgard for 2 years now (since she was ~14 years old) and it took her 2 years to get promoted to 4-Stars. Before moving to Urgard, Elle was living in the Berua Village with her mother, Martina.

Elle specializes in healing magic. Similar to Lily, her dream is to be able to cure the diseases and injuries of people all over the world. Elle heals people with the music of her magic flute. She often spends mornings by practicing her flute at Urgard Courtyard. Elle has chosen healing speciality because of her selfless character and also because of her illness.

Apart from healing, her second biggest hobby is cooking. She often helps Urgard's cook Cocotte and spends most of her free time in the evenings practicing cooking in Urgard's Cafeteria. She also uses magic in her cooking. Even though she's a pretty good cook, she often mistakes sugar with salt.

In Chapter 8 we learn, that Elle is a Siren Magi. It means that she comes from the lineage of Angel Miria's priestesses and she can hear Angel Miria's voice, unlike normal people. The voice of the Angel Miria is conveyed to other people through the sound of her flute.

Elle is a rather gentle character who wants to help everyone, even if her health gets in the way (shown when she blocked Glen's attack that was meant to hit Levi).

She bumps into Levi, where she proceeds to give him a tour of the school. Afterwards, she helps a villager, then gets attacked by monsters. She holds them off, until Levi and Glen come to help her defeat them.

Elle suffers from a chronic illness due to which she easily gets tired and has seizures. To supress her seizures, her mother Martina prepares medicine for Elle. Every month, Elle gets permission to leave Urgard and visit her mother. At one of those visits the Berua Village in which Martina lives gets attacked by Felicia, which happens in Chapter 2.

In Chapter 14 Eruru gets "killed" by Glen while trying to protect Levi from a fatal blow. She is eventually revived in Chapter 17.
For some reason, after coming back to life, Eruru stops calling Levi "Levi-kun" and calls him just "Levi" instead.

A year later, Elle continues to hone her magic skill and healing abilities. She comes across a girl who fell from a window and heals her with a magic of her song. The girl's mother thanks her while the girl asks Elle that is she an angel which she replies that she's just a normal doctor.

Returning home, it's revealed that Levi still has not woken up from his coma. Elle tells him that she's still working hard for the world and everyone's happiness. She then plays her flute again, thinking to herself that she wants him to hear that no matter how far away he is, she want to be with him again. Miraculously, Levi finally wakes up from his coma. He tells Elle that the song had somehow brought him back, and he's now happy to be with her forever more which causes Elle to hug him in joy that her wish is finally granted.

Elle's Room is located on the second floor of Urgard Dormitory. Main themes of her room are music and things connected with water, which is her magical attribute. You can try to play Elle's flute lying on her desk, but you won't be able to.
You can meet Elle in her room in the morning.
Elle's Room is accessible right from the beginning of the game in Chapter 1.

All Elle's Intermissions take place in the Cafeteria.

﻿While Elle has the lowest magic stat of all spellcaster units (ties with Sion), she is arguably the strongest magic tank unit as she posseses the highest resistance of all playable units in the game. Her attack, defense and technique stats are average and her speed is decent. Her HP and MP are balanced very well. Don't bother turning her into a damage dealer though since she is only good at the early-game chapters as a damage dealer with Aqua hammer, in the late chapter turn her into support-based role, she can use Revive, Cure and Curer which are the main spells in order for the team to survive. Since you can gain FD by using supportive spells she can still go offensive with her FD.

Aqua Melody: Song from the aqua!

Song from the aqua!

Elle in the Luminous Arc 3 opening. 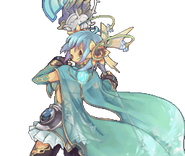 Elle playing her flute at the Urgard Courtyard

Elle with her mother, Martina

Elle in her room

Elle at the Cafeteria

Community content is available under CC-BY-SA unless otherwise noted.
Advertisement