Anogia (アーノギア) is a playable character in the Luminous Arc 3 and one of the protagonists of the game.

Anogia is a legendary knight and the only, if ever, 7-Star Magi. A knight of Angel Miria and a hero thousand years ago, but is now a part of Nefiria.

Anogia is mentioned as the Legendary Hero who saved the world from the Time of Judgement, along with Holy Witch Siville and Holy Angel Miria. Sometime later, he died and is reborn as Nefiria, given the power of Siegfried by Yorg.

If Refi chooses to forgive Anogia, he will join you and Miria will disappear from this world. But if Seraphim Ring is repaired, Miria will return to this world once more.

You face Anogia a total of 2 times in the game. The first is at the Palace Baldia in which he lives Inaluna and the second is along with Miria.

Anogia only drawback is he has movement of 2 but due to the new gamemechanic this is no problem at all. His attack and magic stat is the highest (higher than even Inaluna), second only to Lefy and his other stat are somewhat balanced really well.

Anogia exceed in both type of attack as his final skill physical attack is an always 100% accuracy and can attack two unit at time. Also, you can put stone wall to increase his defensive side. Since his resistance stat is somewhat low, you can put on some Day Charm to reduce damage from some powerful dark-elemental enemy.

Double Blitz
Add a photo to this gallery

Shimmering dawn!
Add a photo to this gallery 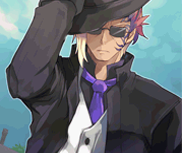 Anogia´s Unison: Taurus
Add a photo to this gallery
Retrieved from "https://luminousarc.fandom.com/wiki/Anogia?oldid=12204"
Community content is available under CC-BY-SA unless otherwise noted.