Alice is the twin sister of Therese. She grew up with the other witches in the Witch Forest in Luminous Arc. Like her sister and most of the other witches, she is worried about the stress on Lady Claire. In Lumious Arc 2, she appears with her sister during an optional sidequest. She reveals to the team that they came over a rainbow to discover the sweets of the world. After the quest is completed they are added to the team as permanent playable characters, however, they do not influence the story whatsoever.

In Luminous Arc, Alice plays a role as an NPC alongside her sister, Therese. She doesn't influence anything in the plot, only helping with the appraisal of Vitae, and adding a little comedic relief. In Lumious Arc 2, Alice, along with her sister, are minor characters who can become playable. Outside of the sidequest in which they join the team, and battle, they do not play a role and it's not essential to get them to advance the plot or complete the game.

Alice is a very versitile Witch, able to use all types of offensive magic aside from Silver and Shadow Frost Magic. Her magic skill outweighs her attack, for obvious reasons, but her attack stat is nonetheless reasonable. While she lacks the powerful spells that the other witches learn, she gains a versatility in casting that is undeniable in a fight. Able to cast spells of five different elements, she can be used in nearly any situation. Also, each of these five spells deals Area of Effect damage in a cross pattern, allowing her to hit multiple enemies. In addition, her Flash Drive can easily catch multiple opponents in a straight line and since it's non-elemental, is unaffected by any kind of Elemental Charm Lapises.

In summary, Alice is a character that specializes in versitility rather than overwhelming power. With her very high MP it is suggested to equip her with several Wizard Heart and have elixir to buff her power. Since using Elemental Crystal Lapis might not worth it.

Photon Burst
Add a photo to this gallery

Eyes full of hope!
Add a photo to this gallery

Before action quote: "This one's for you!"

Before action quote: "You're gonna be toast with butter!" 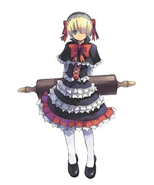 Retrieved from "https://luminousarc.fandom.com/wiki/Alice?oldid=9363"
Community content is available under CC-BY-SA unless otherwise noted.